Chrome built-in taps are available without a diverter for shower enclosures with one shower, or for bathtubs with overflow filling that do not have a shower option. Built-in taps with a diverter are intended for shower enclosures with a fixed and a hand shower, or for bathtubs with overflow filling that do have a shower option. If you choose a built-in tap with the diverter, fit the bathtub with overflow filling and a waste. The diverter directs the flow of water either to the bathtub overflow or the shower head. In shower enclosures, the diverter is intended for switching between the fixed and hand showers. The ceramic cartridges have a diameter of 35 mm. The R-box basic unit is a real innovation. Unlike traditional built-in taps, R-box installation is much easier and should the top part need replacing, this can be done extremely simply. The water supply can be guided through this plastic part without turning off the water mains. Chrome built-in water taps are suitable for Chrome bathtubs as well as other RAVAK bathtubs and shower enclosures. 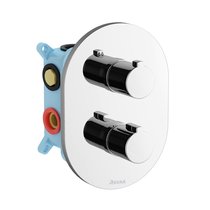